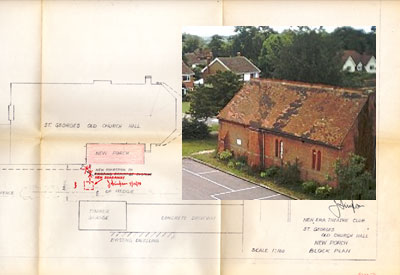 St George’s church had plans to build a new hall at the back of the old hall, and it was then that the committee of NEP decided to approach the church to explore the possibility of hiring the old hall, and making it a permanent exclusive home for New Era Players. The Brownie pack had already found an alternative home. So Muriel Slater, our tireless chairman at the time, and I as secretary arranged meetings with the church authorities. I think the vicar at the time was Piers Nash Williams.

The church authorities were very receptive, but were adamant that if we used the hall and anything needed repairing, they could not help, as their entire fund raising was going towards the new hall. They even quipped that if the roof caved in, it would be our problem. So after much negotiation, and permission from the Oxford Diocesen authorities (I think), we finally arranged to hire the hall for our exclusive use at a very modest rent. As a group we were delighted – not only did we have our own permanent rehearsal venue, we were also going to be able to perform in our own theatre. However, much work was needed before any of this could happen.

When we took over the rent, as mentioned before, the hall was in a very bad state. It was literally just a shell, albeit on the outside, an attractive Victorian building. There were leaks in the roof; there was no heating, apart from an ancient range type fire in the fireplace which was less than efficient. There was a tiny kitchen (no hot water) and two well-worn loos at the rear. Access was via the old oak door to the side porch on the southern side towards the back of the building.

It was all hands to the pump to make the inside of the building comfortable and safe. I remember hours were spent by members cleaning the inside, painting all the walls red, patching up the roof as best we could, etc. There was no stage to begin with, and some one-act plays were performed at the front eastern end of the building (underneath where the lighting box is now situated).  We used rostra to give a bit of height and depth – there were no tabs. The plays had to be simple to stage, as both audience and players entered and exited via the aforesaid porch door.  At this stage, the side door which now leads to the new extension had not been knocked through, neither had the old doorway from the kitchen at the back to the outside of the building. The audience sat on wooden chairs (kindly lent by the church).

Much effort was put in to publicise what was taking place. Fliers were delivered locally, we spoke to everyone we knew and NEP audience membership gradually increased, allowing us to make further improvements to the hall. A simple raised stage was constructed (where the stage is now) and the side door from the auditorium was knocked through. This enabled the players to have use of the whole area behind the stage, as the audience were now able to enter via the southern side. A cinema in Guildford was being demolished and the lovely deco red tip up seats were purchased for £1 each and brought back to Newbury by various members and then installed. Muriel made the red velvet curtains for the stage. We were beginning to look like a real theatre and we were on our way!

You must realise that at this stage, we did not have access to the roof, as the mezzanine floor was a later addition. Therefore the ‘dressing room’ was sectioned off at the back of the stage in the area now used for storing flats.  You can imagine that there was very little room and the porch and kitchen areas were often used for dressing. The kitchen was slightly separated and teas and coffees were served through a hatch, taken outside and in through the new side door to the auditorium and served to audience in their seats. There was no costume or props storage – this came later with the construction of the mezzanine floor. Everything was brought to the theatre for each play and taken home again. The prompt now sits up in the roof area, but back then the prompt sat on a chair to the left of the front row, facing the stage, and shielded by a screen.

Because we did not have a theatre license, we were unable to invite the public in to pay at the door, and so a theatre membership scheme was introduced. There was an incentive for the public to become ‘members’ which enabled them to select their preferred night and receive their tickets in advance of the plays at a discounted price. This obviously worked well, as the system is still in operation today, although now that we have a theatre license we are able to sell tickets at the door.  NEP members and audience members were able to purchase any surplus tickets for family and friends. I have a copy of the first letter sent out to potential theatre club members in January 1978 advising that they can become members for the princely sum of £2 per annum – this to include tickets for four plays! Extra guests could be admitted for 50p per ticket. Members could choose whether to attend on a Friday or Saturday on two consecutive weekends.

We endeavoured to keep expenses to a minimum. My husband Marc who worked within the paper industry was able to supply card and paper to Sam Slater who printed the tickets and programmes on his hand printing machine in his garage. (Remember, this was before the days of personal computers, home offices, etc.). Postage was saved by members handing out tickets to friends, and I recall cycling around Wash Common with my two small children to deliver tickets to local members.

We were very fortunate in having ‘in-house’ writers. Muriel wrote plays under the name of Georgina Reid and Valerie Maskell wrote under her own name. Several of their plays were premiered in our theatre (The Little Fortress, by Georgina Reid, Alas Dear Reader by Valerie Maskell among others). We also took part in the annual Tilehurst Eisteddfod and were lucky enough to walk away with awards for writing and performance. ‘Just a Song at Twilight’ written by Valerie walked away with two awards – one for original script and one for best actress, performed by Margaret Rigby.

Over the years, the theatre has undergone many improvements including the addition of central heating, lighting box, mezzanine floor – allowing for a proper dressing room, costume and props store, improvements to the kitchen area, and finally the erection of the wonderful extension on the southern side of the building. All this was possible due to the very talented members of New Era Players and friends who have contributed in so many ways with their time, enthusiasm, dedication, technical and practical ability, imagination and pure vision. The old adage ‘Great Oaks from Little Acorns Grow’ springs to mind. What a success story!

If you have seen any of our productions, you know that our acting members and crew put 110% in making them stand out from the crowd. And they do this because they love theatre and because they want to show you, our audience, what they are capable of. None of this can be done without your support. You can support us by subscribing to our newsletter, or, even better, by becoming a Friend! 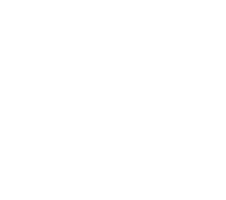 Support New Era Players by becoming a Friend! Your tickets for all four of our main annual productions are guaranteed, om the evening of your choice, and at a discounted rate!! What's not to like?!

By subscribing to our newsletter you will always know what productions New Era Players will be performing, so you can get your tickets well on time! You also help us to get better known in the community.

Save Money by Becoming a Friend

Become a friend and have your tickets assured for each of our four main productions in a year.  To join as a friend will only cost you £36 per annum (or £30 if you are over 60).  Nominate which day of the week you would like to come and this will be your starting point.  If you cannot make it on the chosen date for one of the plays simply phone the box office to swap to another night or give your tickets to someone else, after all, you’ve paid for them! Contact our Friends Coordinator by completing the form on the right, and we will be in touch shortly to make sure that your tickets are secure.

I would like to become a Friend of New Era Players

Save Money by Becoming a Friend

Become a friend and have your tickets assured for each of our four main productions in a year.  To join as a friend will only cost you £36 per annum (or £30 if you are over 60).  Nominate which day of the week you would like to come and this will be your starting point.  If you cannot make it on the chosen date for one of the plays simply phone the box office to swap to another night or give your tickets to someone else, after all, you’ve paid for them! Contact our Friends Coordinator by completing the form on the right, and we will be in touch shortly to make sure that your tickets are secure.

I would like to become a Friend of New Era Players

By joining our mailing list, you will always be notified of upcoming productions, art exhibitions and any activities New Era Players organise in the community.

You have Successfully Subscribed!